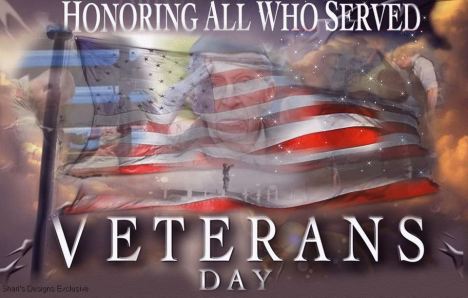 One hundred years ago today, the echoes of the artillery faded away at the eleventh hour of the eleventh day of the eleventh month of 1918, and World War I was over.  It was called the War To End All Wars, and that turned out to be overly optimistic.  We’ve come to understand there will always be a need for patriotic men and women to come forward and stand between our country and all the threats that face it.  And someone has always come forward.  Some of them were drafted, some joined because of a desire to give something back, and some really just wanted a way to pay for college.  But each of them – every single one – has sacrificed something for their country.  Some in small ways…some in huge ways.  Some in ways that you cannot imagine if you haven’t been in their boots.  A lot of those sacrifices didn’t happen because someone decided to be brave or went out looking for a chance to be a hero…they happened because someone decided to put the needs of their families and friends and countrymen ahead of their own, and did whatever they needed to do so that our nation would remain the land of the free.  To have known these people, work beside them, and wear the same uniform has been an honor and privilege.  To our brothers and sisters in arms…we salute you.