This is what life is like for someone hated with great passion by Mother Nature, not to mention the Universe.

Three weeks ago, I had a tri-axle truckload of topsoil (?) delivered to fill in all the trenches in my front yard caused by the grass unwilling to grow in the shade of all the trees I’m not allowed to cut down, leading to no roots to hold the soil in place, leading to gobs of erosion over the years.  Lawn (?) repair was overdue.

I spent the intervening eternity spreading dirt as I picked out the giant rocks, tree roots, and tangles of rusty barbed wire that somehow appeared in my topsoil (?).

Then I lovingly sprinkled buckets of sun-and-shade-loving (?) grass willy nilly about the property, spread straw everywhere, and started watering because the frequently-promised rain refused to materialize. 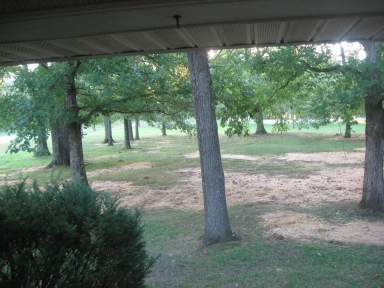 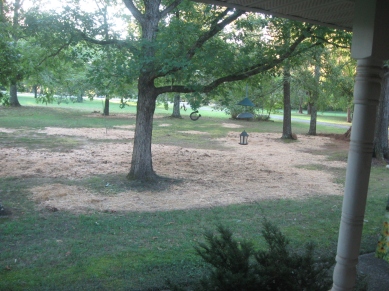 The grass began growing.  Success!  Just a little while longer and I would maybe even have an actual lawn instead of a yard of dirt.

Then, today, the forecast was for 40% chance of scattered thunderstorms, with an anticipated accumulation of .02″.  This area has a long history of forecasting rain, pushing the forecast back and back and back, and finally just staying dry.  I jokingly (?) said I should turn on the sprinklers and that way it really would rain.

When it got over an inch of accumulation, I finally put on a poncho and my rubber boots and went out to turn off the sprinklers.  It’s almost stopped now, and so far, we’ve gotten 1.72″.  The rivers going through the yard are starting to drop, but they’ve been running high and very brown from all the topsoil they were carrying away. 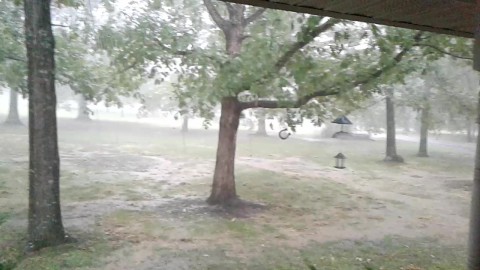 Yes, I know.  My fault for making jokes with Mother Nature.

If you hear in the news about a giant sinkhole swallowing half of Tennessee. . .that was me.  Tell my story to the tabloids.